This tutorial shows how to implement file and then image uploading with Django. We'll build a basic Instagram clone.

Whether you're on a Windows or Mac laptop the Desktop is a convenient place to put our code. The location doesn't matter; it just needs to be easily available.

Open up the command line and navigate to the Desktop. Then create a directory, insta, for our project. We will create a new virtual environment, activate it, and install both Django and pillow which is the Python image process library Django relies on for image files. For non-image file uploads, pillow is not needed.

Since we've added a new app we need to tell Django about it at the bottom of the INSTALLED_APPS configuration in settings.py.

Now run python manage.py migrate to setup the new database for our project.

Starting with the database model is a good choice. In our case our model Post will only have two fields: title and cover. We'll also include a __str__ method below so that the title appears in our Django admin later on.

If we wanted to use a regular file here the only difference could be to change ImageField to FileField.

Open up config/settings.py in your text editor. We will add two new configurations. By default MEDIA_URL and MEDIA_ROOT are empty and not displayed so we need to configure them:

We could pick a name other than media here but this is the Django convention. We'll also make an images folder within it to use shortly.

Now update the posts/admin.py file so we can see our Post app in the Django admin.

And we're all set! Generate a new migrations file.

Then run migrate to update the database.

Now we can create a superuser account to access the admin and then execute runserver to spin up the local web server for the first time.

Upon "Save" you will be redirected to the Posts page where we can see all our posts.

If you look within the local media folder in your project you'll see under images there is now the djangopony.png image file. See! I told you that was what MEDIA_URL would do.

Ok, so at this point we're done with the basics. But let's take it a step further and display our posts which means urls.py, views.py, and template files.

The confusing thing about Django is that you often need 4 different but interconnected files for one webpage: models.py, urls.py, views.py, and a template html file. I find it easiest to reason about this by going in order from models -> urls -> views -> template files. Our model is already done so that means diving into URL routes.

We'll need two urls.py file updates. First at the project-level config/urls.py files we need to add imports for settings, include, and static. Then define a route for the posts app. Note we also need to add the MEDIA_URL if settings are in DEBUG mode, otherwise we won't be able to view uploaded images locally.

Next we'll need to sort out the URL routes within the posts app. First create that new file in your text editor posts/urls.py. Then we'll put all posts on the homepage so again use the empty string "" as our route path.

This references a view called HomePageView which we'll create next.

We can use the generic class-based ListView here, import our Post model, and then create a HomePageView that uses the model and a template called home.html.

Boom! Moving on the last step is that template file called home.html.

We have two choices for our template's location. We could put it within the posts app at posts/templates/posts/home.html but I find that structure redundant. Plus it's harder to reason about templates when they are all buried within their respective apps. So typically I will instead create a project-level templates directory.

We tell Django to also look here for any templates by updating the TEMPLATES configuration within config/settings.py.

Then create a template file within this directory, templates/home.html, that will display the title and image for all posts. Just like Instagram would :)

Ok, that's it! Make sure the server is running with the python manage.py runserver command and navigate to our homepage at http://127.0.0.1:8000. Refresh the page if needed. 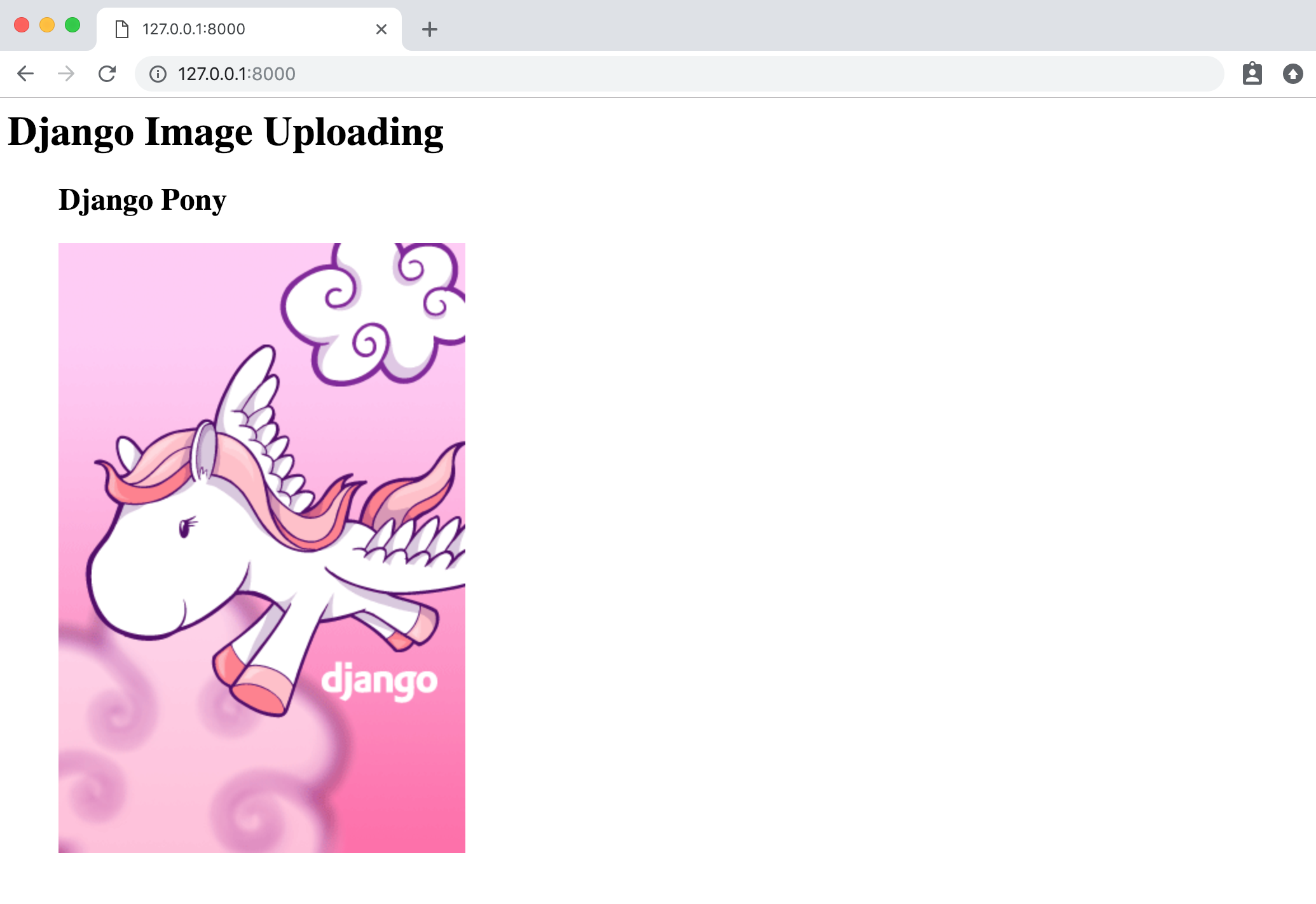 And voila! If you add additional posts with a title and image via the admin they will appear on the homepage.

Now we can add a form so regular users, who wouldn't have access to the admin, can also add posts. That means creating a new page with a form.

Let's start with the views.py file. We'll name our new view CreatePostView which will extend the built-in Django CreateView. We'll also import reverse_lazy to handle the redirect back to our homepage after the form has been submitted.

Within the view we specify the model, a form_class which we'll create next, the template_name, and finally a success_url which is what we want to happen after submission.

Next up that form. First create it in your text editor at posts/forms.py. Then we can extend Django's built-in ModelForm. All we need for our basic form is to specify the correct model Post and the fields we want displayed which are title and cover.

We'll make a dedicated page for this form at the path of post/.

Then create the new template at templates/post.html. And fill it with a headline and form. It's important to always add csrf_token for protection. We're specifying form.as_p which means Django will output each field as a paragraph tag.

After you submit a new post you'll be redirected back to the homepage and will see all the posts.

Hosting this site in production would require a few additional steps. Notably, it's likely that you would use WhiteNoise on the server for your static files, however WhiteNoise explicitly does not support media files. The common practice is to use django-storages for this purpose and connect to something like S3.

What else? You probably want to put restrictions around the image size which can be done initially in the models.py file or with CSS. Perhaps you want to add edit and delete options as well for the Post. And you'll likely want a thumbnail version of the images too which can be done with sorl-thumbnail.